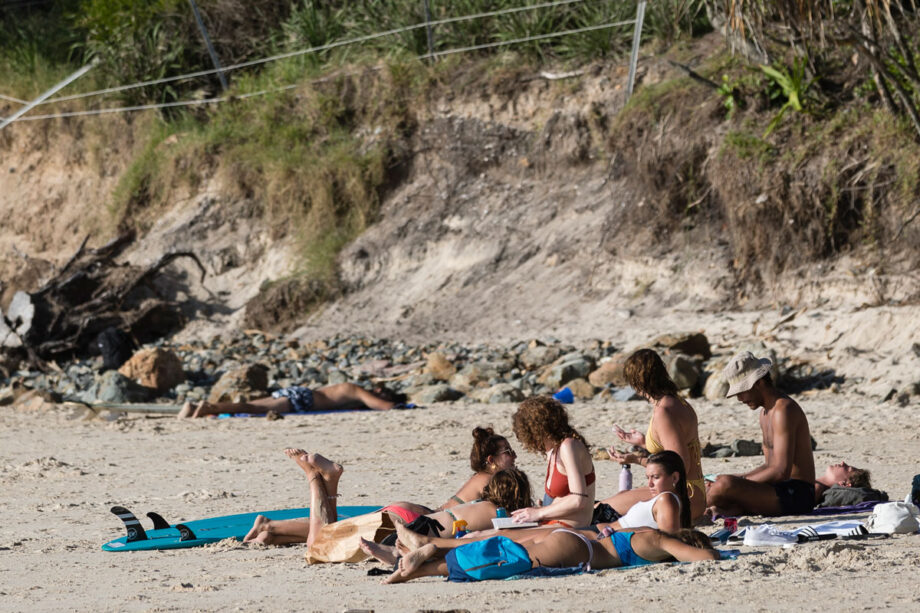 The melting pot of peace and harmony that is Byron Bay just had a controversy.

A man, whose Facebook profile says he lives there, has taken to the local Facebook community board to share a disgraceful incident that allegedly just happened at iconic Byron Bay surf break The Pass. 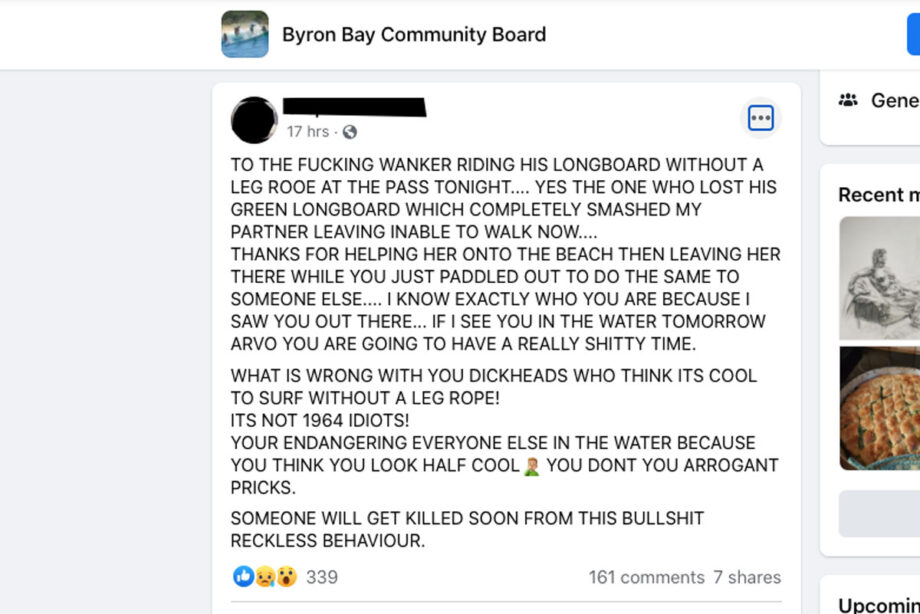 "TO THE FUCKING WANKER RIDING HIS LONGBOARD WITHOUT A LEG ROOE AT THE PASS TONIGHT.... YES THE ONE WHO LOST HIS GREEN LONGBOARD WHICH COMPLETELY SMASHED MY PARTNER LEAVING INABLE TO WALK NOW...."

"THANKS FOR HELPING HER ONTO THE BEACH THEN LEAVING HER THERE WHILE YOU JUST PADDLED OUT TO DO THE SAME TO SOMEONE ELSE.... I KNOW EXACTLY WHO YOU ARE BECAUSE I SAW YOU OUT THERE... IF I SEE YOU IN THE WATER TOMORROW ARVO YOU ARE GOING TO HAVE A REALLY SHITTY TIME."

"WHAT IS WRONG WITH YOU DICKHEADS WHO THINK ITS COOL TO SURF WITHOUT A LEG ROPE!"

"YOUR ENDANGERING EVERYONE ELSE IN THE WATER BECAUSE YOU THINK YOU LOOK HALF COOL. YOU DONT YOU ARROGANT PRICKS."

"SOMEONE WILL GET KILLED SOON FROM THIS BULLSHIT RECKLESS BEHAVIOUR."

He also said, further down in the comments: "Interesting how not one of you entitled non leg rope wearing pieces of shit have commented."

"I’ll see you all in the water tomorrow arvo and we can all have a wee little chat."

Surf publication BeachGrit, which first reported on the post, wrote on Tuesday: "There appears to be very little support for the fucking wanker on a leashless green longboard."

Comments from the community board appear to bear that out.

"Just wait on shore and take the free board. You should get a 5 min head start."

"Sad this happens far too regularly, why can't they make it law to wear a leash."

"No legrope..it's simple. Just fuck off."

"Apparently you can’t walk the plank with a leg rope so I’ve been told by a 21 year old male with a blonde bowl cut haircut, driving a 60s series land cruiser."

Another surfer (and photographer) Jess Parkes wrote: "My mates have always teased me for wearing a leggie. I just tell them they’re dangerous and off I trot. It doesn’t impede your surfing you can still cross step and walk to the nose. And as a surf photographer I promise y’all it doesn’t look uncool. And yep I’ve had clients ask if I can edit their leggy out."

"I don’t know when the brainwashing began that instilled in them this nonsense but leggies are literally a tether for the massive weapon we are riding on in the unpredictable sea. It’s uncool to NOT wear one."

Jess elaborated further to DMARGE: "It wasn’t a thing to wear leggies when Pete Drouyn, Nat Young Bob McTavish etc. were surfing. And this era inspired a lot of longboarders – myself included – so I understand the desire to emulate this vibe."

"But there’s a gargantuan difference between those splendid carefree UNCROWDED days and today’s surfing. Anyone not tethering their board to themselves when there are 100 people around them are just nuts in my humble little opinion." 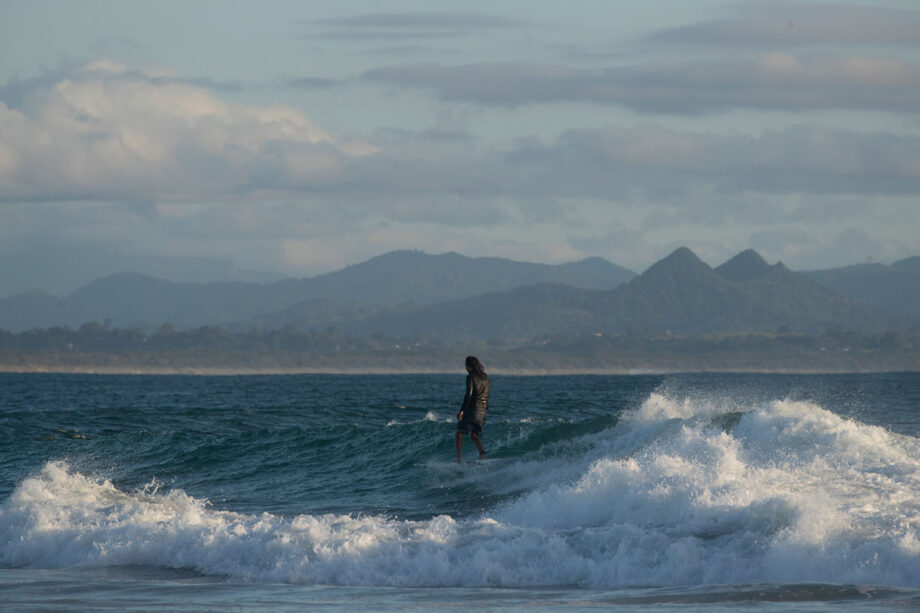 BeachGrit also, however, asked the question, "But does he [the fucking wanker on a leashless green longboard] have the silent majority in his corner?"

Though much disgust was directed at the 'fucking wanker on a leashless green longboard' in the BeachGrit comments too, one remark defended their existence (or, at least, argued we shouldn't go the way of America).

"I tend to agree," another wrote. "Dodging an errant log is pretty much the only exhilarating moment when surfing a 2ft sand bottom point break with 500 shit c*nts."

Glib? Absolutely. Selfish? Probably. True? There's something in it, we reckon.

We put it to Jess.

"To the people saying maybe we should just play chess. That made me laugh. But I don’t agree that making noise about surf safety is being over the top."

"Surfing is dangerous. I’m an underwater photographer and it’s a beautiful unpredictable dangerous environment. It’s Mother Ocean. She’s magic and wild. It’s why we are all there – to immerse ourselves in the tonic of the wild.

"We just don’t need an added danger and I totally understand some people may not be aware some may have always been used to surfing without one etc. But the negative spiteful attitude that people like this bloke on Facey are describing – it’s just pitiful behaviour.

"We need to educate one another on ocean safety and respectful surfing etiquette before someone gets an 11inch fin or 10 feet of glassed weaponry to the face. Because it does happen and it’s so gnarly."

Going back to the Byron Bay Community Crowd, comments like, "You should sue the person," continue rolling in, with users pointing to articles published by the likes of Swellnet and the ABC regarding the legality of incidents like this in the surf (this is also far from the first time this issue has caused a stir in Byron).

The original aggravated user also made some good points of his own: "Bunch of hipster wanna be’s Peace and love but fuck everyone else’s safety in the water because they think they look hot shit. Guaranteed none of these dickheads have kids as they wouldn’t be putting them in danger like that."

Further issues discussed included encouraging mal riders to tie their boards to their cars better ("Hipsters tie your Mal's down with two straps on the roof racks, one strap to try and look Cool just isn't safe, I have seen a mal come flying off a cars roof on the highway near Brunswick Heads") and dealing with negative events in a positive way.

Speaking of: one user criticised the way the situation had been dealt with.

"Instead of making public posts threatening violence which will only scare the guy into hiding, you should be calling for witnesses so he can be identified. Then hand it over to the police. Get a medical assessment of the injuries while they are still fresh for a possible injury claim. Hope she will be ok soon."

"I’m very sorry to hear about your partner, hope she’s ok," another Facebook user wrote." Do you think retaliating with threats and violence is the answer. Having a conversation pointing out the impact his actions has had on your partner would be a more positive approach."

Fortunately, another Facebook user chimed in with a potential solution: "I’m happy to offer a free healing session or more.. even for the shock and upset." 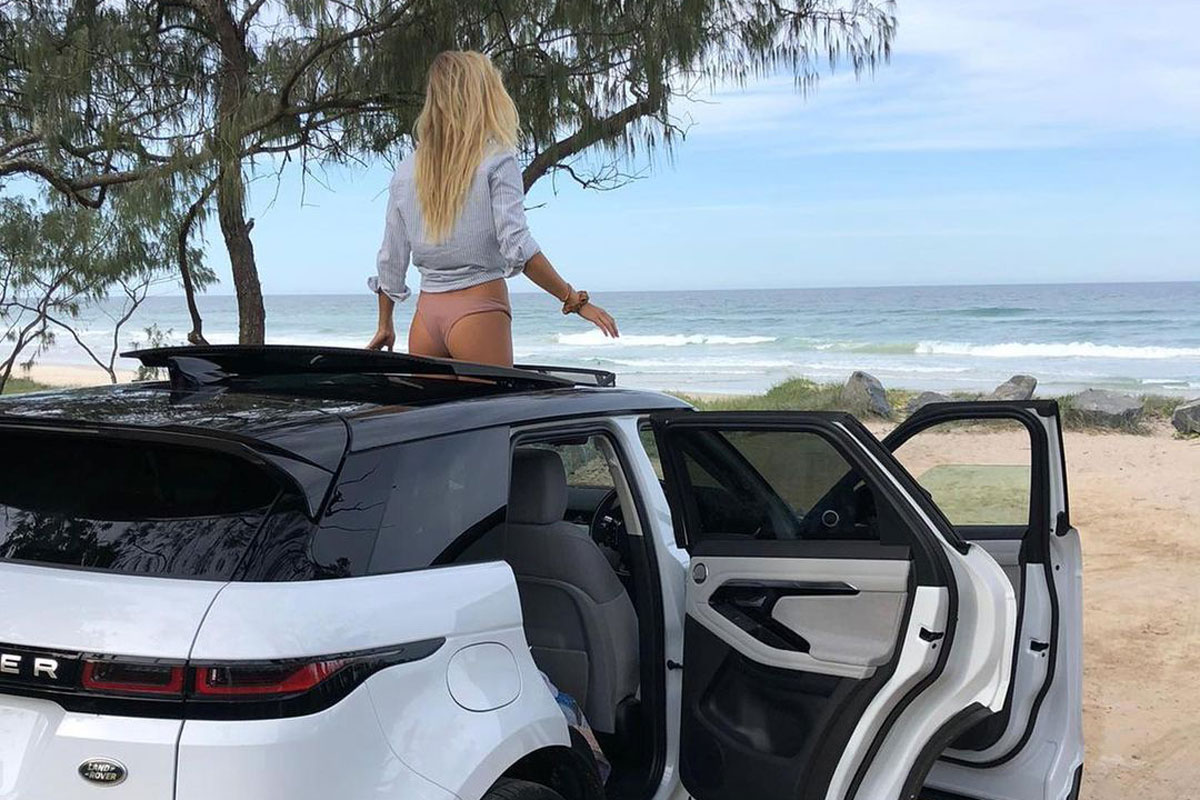