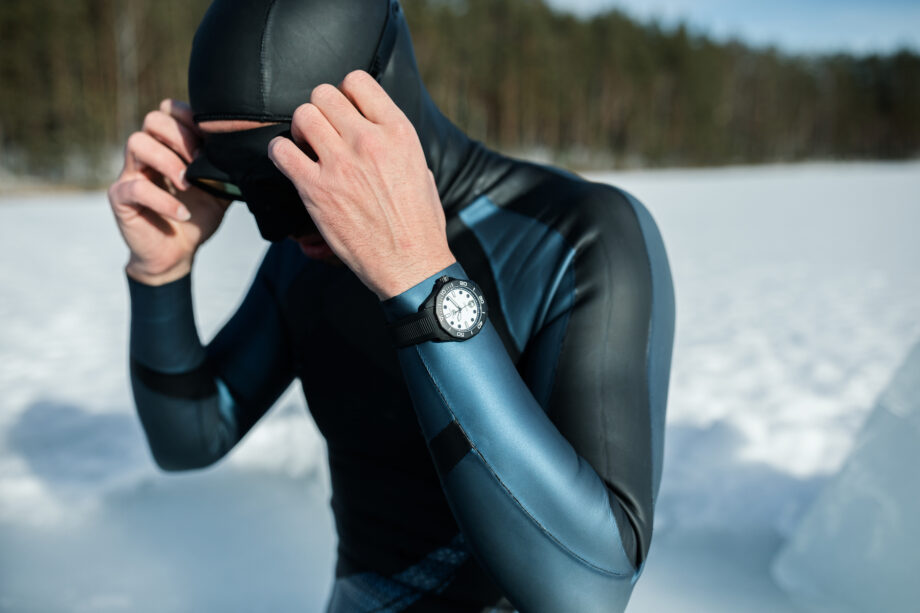 In his almost six decades of filmic exploits, the legendary fictional secret agent James Bond has worn a wide variety of high-end timepieces. When No Time to Die comes out later this year, our current Bond, Daniel Craig, will be wearing an OMEGA – but 007 has favoured many other brands: Rolex, Seiko, Breitling, Hamilton...

One of the most underrated watches Bond has ever worn was the TAG Heuer 1000 Professional 'Night Diver' that Timothy Dalton donned in 1987's The Living Daylights. Featuring a blacked-out PVD case and bezel combined with an unusual fully luminescent dial with darkened indices (when the reverse is common practice), the Night Diver, as the name implied, was the perfect companion for the stealthy spy.

Now, in 2021, TAG Heuer is reviving the legendary Night Diver as a new variant of its Aquaracer Professional 300 Collection: taking the signature features of the original Night Diver and incorporating them in a far superior timepiece, both technologically and aesthetically. 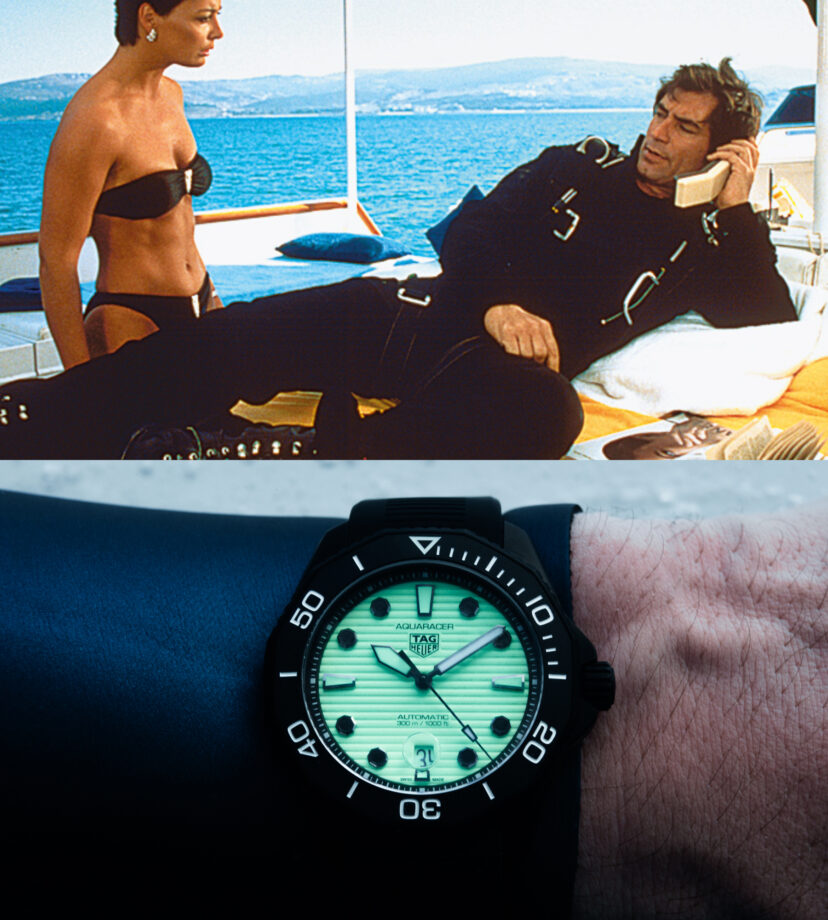 Dalton as Bond wearing the 1987 Night Diver, and the 2021 Night Diver underneath for comparison. Images: MGM / TAG Heuer[/caption]

The Aquaracer Night Diver (ref. WBP201D.FT6197) immediately stands out from the pack thanks to its tuxedo-like black silhouette, its 43mm stainless-steel case, bezel, crown, caseback and clasp all coated in matte black diamond-like carbon, better known as DLC. The original Night Diver used PVD to achieve the same black look – DLC, however, is a far more durable finish and produces a deeper, more luxurious black.

RELATED: Rado’s Captain Cook High-Tech Ceramic Is The Perfect Watch For The Outdoors

The Aquaracer Night Diver’s other signature feature is its fully luminescent dial, which is coated in green Super- LumiNova to deliver exceptional glow-in-the-dark performance. To ensure ultimate legibility in extreme low-light conditions, the watch’s minute and central seconds hands are filled with blue lume to contrast with the green of the dial – another feature the original lacked but a clever quality-of-life improvement.

If that wasn't enough lume, the hour hand and octagonal hour markers at 12, 3, 6 and 9 o’clock are filled with green lume, and the remaining octagonal hour markers are all edged with black lacquer. The triangle on the unidirectional rotating bezel at 12 is also filled with striking blue lume to match the blue of the minute and central seconds hands.

Under the skin, the new Night Diver is a strikingly different beast from the original. Where the original featured a quartz movement and 200m of water resistance, the Aquaracer Night Diver utilises TAG Heuer’s capable Calibre 5 automatic movement with a 38-hour power reserve and 300m of water resistance. It also features a robust rubber strap as standard as opposed to the jubilee-style bracelet of the original – a more performance-focused choice. 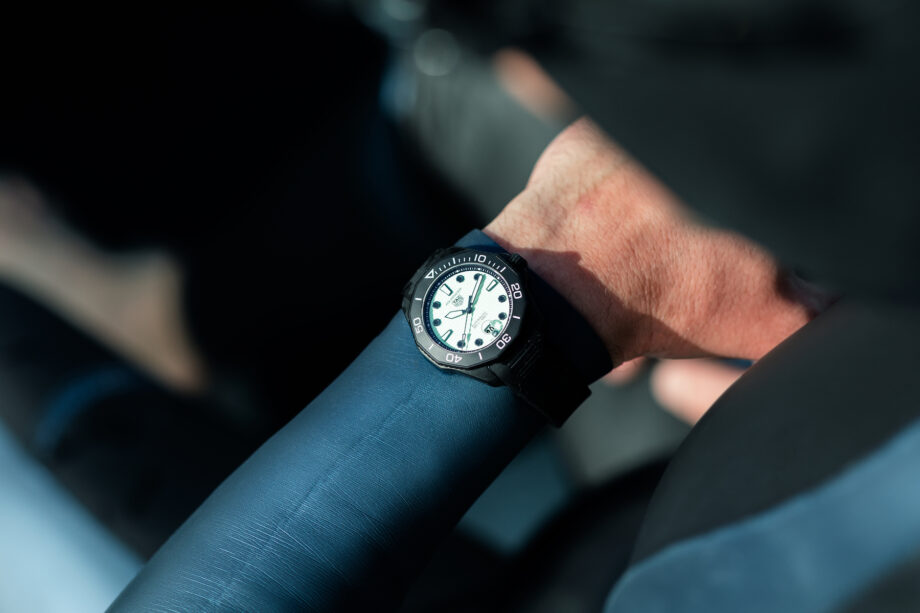 The 2021 Night Diver out of the water. In daylight (or should we say the living daylights?), the green glow of its lume-filled dial is replaced by a ghostly, stealthy white. Like Bond's tuxedo. Image: TAG Heuer[/caption]

While the Aquaracer Night Diver is a truly distinctive-looking watch – and arguably one of the best watches Bond's ever rocked on the silver screen – it's worth pointing out just how brilliant the Aquaracer Professional 300 family it's a member of really is.

The case is also somewhat slimmer, lighter, and shorter lug-to-lug than the outgoing iteration, with the angular indices of the older model also swapped out for octagonal indices that evoke classic dive watch styles with a subtle, individual touch. Another unique touch is the date window, which has been moved from 3 to 6 o’clock and its cyclops lens now sporting a perfectly spherical design – a really unique look. 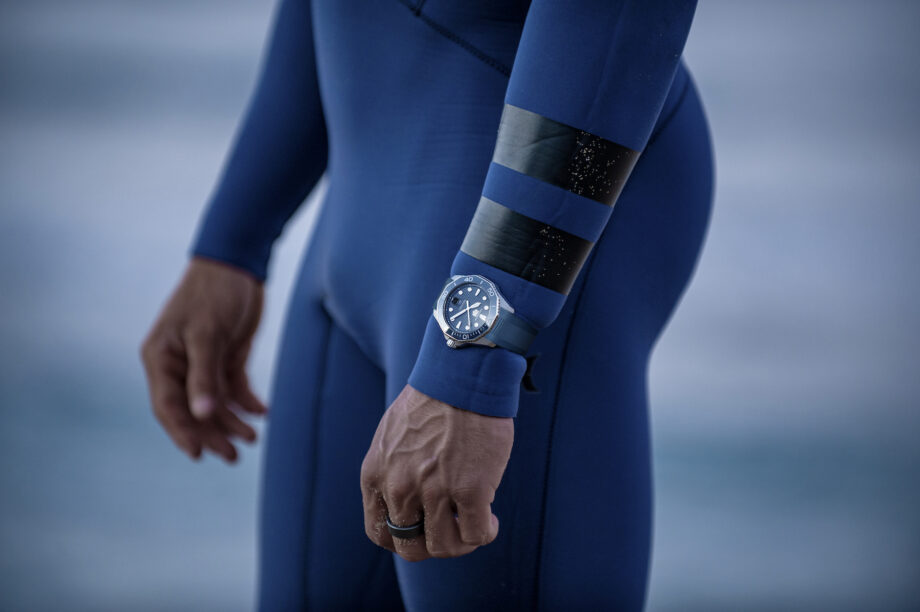 The release of the Aquaracer Night Diver also coincides with the reveal of three new rubber strap references within the Aquaracer Professional 300 collection, bringing the total number of watches in the collection to 11, including the Night Diver and another limited edition throwback model, the ‘Tribute to Ref. 844’ – another watch we reckon Bond would approve of.

Whether you're a fan of spy movies or just know a good dive watch when you see one, the Night Diver – as well as the rest of the Aquaracer Professional 300 collection – are the perfect partners for any sort of mission, whether you're diving into the deep end or sipping on a martini. They're all very cool watches.

Check them all out at TAG Heuer's online boutique here.

The post TAG Heuer Revives The Most Underrated James Bond Watch Of All Time appeared first on DMARGE.