Timothée Chalamet Channels ‘The Godfather’ With Cartier Rings In Venice

Timothée Chalamet might be the most important fashion tastemaker in Hollywood.

The fresh-faced 25-year-old actor, best known for his starring role in the cultural tour de force that was 2017's Call Me by Your Name, is easily one of the most versatile and interesting style icons of the last decade. Alongside other celebrities like Harry Styles, Jared Leto and Cillian Murphy, Chalamet's been responsible for pushing the boundaries when it comes to androgynous fashion and redefining what a modern male heartthrob is supposed to look like.

Unlike some of his contemporaries, however, Chalamet's got a particularly unique retro and surprisingly masculine edge. He's got a knack for pairing really radical, genderfluid pieces with really classic ones, grounding his experimental tendencies in an irreverent and accessible masculinity that we think is just brilliant.

Case in point: this outfit he wore to the 78th Annual Venice International Film Festival earlier this week for the premiere of his latest film, Dune. Chalamet looked slick as hell in a crystal-dotted Haider Ackermann ensemble, which he contrasted with some Wayfarer-esque sunglasses and a number of archival Cartier rings – like he was the world's most fashion-forward Mafia consigliere. A young Corleone. 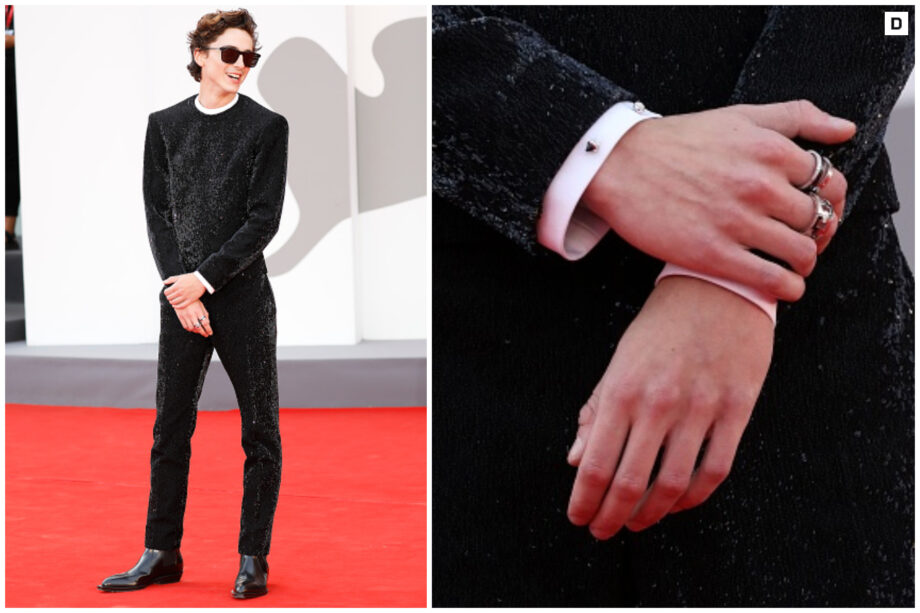 The two rings are from 2005 and 2017 respectively and are crafted from 18ct white gold, black ceramic and diamonds. He also pinned a Cartier brooch to his right cuff and wore a Cartier bracelet on his left wrist. They're subtle touches but they've already got the fashion world buzzing, with Vogue gushing that "Chalamet makes the case for men's jewellery".

RELATED: Cool Men’s Jewellery Brands That Will Stop You From Looking Like A Pirate

It's no secret why he's wearing so much Cartier: Chalamet has just been announced as the famous French jewellery brand's next ambassador – joining an illustrious crew that includes other big names like Jake Gyllenhaal, Rami Malek and Troye Sivan. Unlike those other men, however, who primarily work with Cartier's watch division, Chalamet expressed a specific interest in working with Cartier's jewellery division.

That said, we wonder what Cartier watch Chalamet would wear. Something classic and demure, like a Tank? Perhaps something more iconoclastic, like a Pasha? We'll just have to wait for the next red carpet to find out...

The post Timothée Chalamet Channels ‘The Godfather’ With Cartier Rings In Venice appeared first on DMARGE.